One of the most complex problems in the management of critically ill patients is to know the state electrolyte, vascular control and cardiovascular responses to physiological stress. Is vast amount of information that we need to manage patients est0s theoretically, but on the other hand with a simple understanding of the physiology of the cardiovascular circuit applied to these patients, can manage in an optimum way.

The critically ill patient is to be understood, as no ordinary patient. The physiological functions of many organs are affected after a state of chock, regardless of the shock to occur.

In addition, such patients require mechanical or pharmacological media for sustaining life, such as mechanical ventilation, continuous renal clearance techniques dialysis and ultrafiltrationcomplex systems of monitoring catheters and lines that give extensive details of information added. Driving conditions in these patients often are similar in certain sections and include special needs.

This chapter is for talking about, how changes in circulating volume and vascular compartments, determines the state of cardiocirculatory Unit. The circulatory system is composed of the heart as a pump and the source of a network of hundreds of thousands of tubes arteries, veins and capillaries of different sizes from several centimeters to millimeters and microns.

This vast network, which originates from the heart to the body blood system and through the capillaries returns to the heart venous system to the lungs lower circuit and oxygenated blood is returned immediately to the organs. The so-called contact area between the arterial and venous system is called arteriolar and venular system and is a huge mesh of fine arteries and veins in all organs of the body called capillaries.

What is important is that these capillaries are a series of pores through which a passage of substances produced by two mechanisms:. Thus capillaries in some territories we can find certain features to encourage the passage of some molecules, nutrients, …. In the liver if required to pass and therefore find substances larger pores. In hepatocytes can spend even plasma proteins.

It has to allow the passage of some substances from the blood. They will be very important because they are exchanged water and substances which may be dissolved or in the interstitial spaces. We speak of the territory or capillary bed, consisting of a series of small vessels, with a specific function that will lead to the role of various vessels.

Will always start at the end of an arteriole and the beginning of the bed, where the diameter decreases, it becomes metaarteriolas, which have a discontinuous muscle layer. From this form capillaries in the muscle layer that does not exist, only a muscle endothelium, thus neither shrink nor swell. 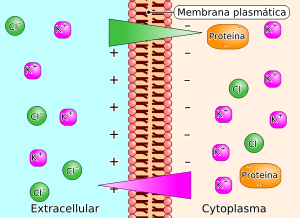 Then go to the heart and lead to venules where again displayed a muscular layer. Importantly, the presence of capillary sphincters are governing you have more or less blood to flow into these gkbbs. Made from very thin wall pipes and which are formed from the lymphatic capillaries, which are found in all animal tissues.

They will join these capillaries forming a larger capillaries that flow into the jugular and subclavian veins. Lets pick up liquid and bring to the bloodstream. Excess fluid collects and recovers proteins that can escape from the capillaries.

These proteins have to be a through vessels, increasing the oncotic pressure and increases the filtration process which would have an excess of fluid in tissues. The liquid flowing through them is the lymph interstitial fluid is identical. The lymphatic vessels pass ecaucion lymph nodes will have the filtration function.

Lymph flow through vessels is similar to the blood in the veins. The lymph moves through muscle contractions and by contractions of the walls themselves. These vessels will also help for a system like the venous valves that prevent donjan retreat of the lymph. Another important factor is the progressive entry of fluid into the lymphatic capillaries, which depends on the hydrostatic pressure of interstitial fluid PIF.

Increasing the pressure favors the liquid flow. Therefore the severe fall in blood pressure, can be started from the HEART cardiogenic shock from the circuit or circuit LUNG veins of lower obstructive shock as pulmonary embolism and from within the ductwork due to changes in endothelial cells in arteries, veins and capillaries distributive shock as in sepsis, anaphylaxis or disorders of the spinal cord. In the graph you can see how from the heart chambers, some back and forth the pulmonary circuit left atrium and right wcuacion and from the left ventricle into the aorta, blood is ejected into other organs heart, brain, intestine, liver, kidneys and organs of the pelvis and legs.

This blood returns by the venous system from each body before the right atrium and the process begins with each heartbeat. The total mobilized blood is 4. Obviously this figure is only illustrative of a schematic manner, since the total area of ducts in the body is enormous.

The patient is serious, you need mechanical ventilation or other media of both mechanical ecuavion life-sustaining drugs. The process leading to the stabilization does not mean that conditions improved, but it allows management more standardized, which at the beginning of shock.

Consider the cardiovascular system, such as a hydraulic closed circuit that includes the heart, arteries, arterioles, capillaries and veins 1. Now if we look at the components of the arteriovenous circuit, we have the following characteristics The difference between the 3. The variables ce this medial pressure are:. Usually feature is the presence of edema as the cause of the maldistribution of the liquid. These edemas occur by several mechanisms:.

Resuscitation with fluids after a very intense shock. Vasoplegia in septic shock, conditions a loss of fluid into the interstitial space, which is difficult to extraeer, since the morphological changes of renal function the tendency to tubular necrosis, causes retention of Na and H2O. Even the need for vasoactive agents noradrenaline does not produce the reintroduction of the interstitial fluid, because there are more mechanisms involved endothelial dysfunction, adrenal insufficiency, pituitary insufficiency, presence of inflammatory mediators, etc.

Plasma albumin level hypoalbuminemia after acute systemic inflammatory response syndrome Venous return venous resistance from the blood to the heart. The peripheral venous compartment, has a very altered tone and the effect of pressure inside the chest in patients with mechanical ventilatory support. The fall of intravascular volume, conditions Na and H2O retention. When we act on the shock of onset, recovery of bodies is not immediate. The intent is to prevent cell death hyperlactataemia due to the poor presence of oxygen in tissues.

Always in shock regardless of type is a relative hipovemia ml minimum pressure corresponding to half fill circulatory. Fluid management is a priority before initiating supportive measures vasoactive pressor drugsexcept imminent death due to very low blood pressure. When we got to stabilize the blood pressure usually exists organ dysfunction, maldistribution of liquid and acidosis, which is not corrected immediately, the norm is for a period of days.

If the case continues and is in brackets, pass the dependency circulation, in this case in need of correction fluid and the rational use of diuretics and maintaining a support with albumin to maintain a tone of plasma oncotic circulation and promote the reabsorption of fluid from the interstitium. The influence of central venous pressure CVP on venous return. The peripheral venous compartment under normal conditions usually found close to the average pressure circulatory filling.

In normal conditions the half intrathoracic pressure during the respiratory cycle is negative. This facilitates venous return to the heart, especially during inspiration, when the pressure becomes more negative.

The following result is leakage from that volume to the interstitium third space appearing edema or swelling. The influence of peripheral venous pressure on venous return.

For example after a hemorrhage, or loss of large amounts of liquid and after a great sweating, vomiting or severe diarrhea, could decrease the volume of circulating eckacion and significantly reduces the volume of blood in the veins, descending subsequently in the compartment peripheral vein.

Albumin is a protein produced by the liver. Is a protein found in high proportions in the blood plasma, the main blood protein and one of the most abundant. The serum albumin test measures the amount of this protein in the clear liquid portion of blood.

Albumin is essential for the maintenance of osmotic pressure necessary for the correct distribution of body fluids between the intravascular compartment and extravascular located between tissues.

As shown, the albumin is participating in a large number of processes, virtually all related to the complimentary of the blood, but the most important role is to maintain donnxn suitable oncotic pressure which is the osmotic pressure due to plasma igbbs that appears between vascular and interstitial compartment.

Blood capillaries being less permeable to high molecular weight compounds, such as proteins, they tend to accumulate in the donnsn plasma, resulting less abundant in the interstitial fluid.

The blood vessels of this protein required to maintain the balance between vascular and interstitial spaces. Otherwise, the difference between a space more or less ee hypertonic conditions the water passage between them, generating the differences between both compartments.

Formulated in by the British physiologist Ernest Starling, the Starling equation illustrates the role of hydrostatic and oncotic forces also called Starling forces in the movement of flow through the capillary membranes. Predicts the net filtration pressure for a given liquid in the capillaries. Filtration is therefore greater than resorption. The difference is recovered to the bloodstream through the lymphatic system.

The Gibbs-Donnan equilibrium across the epithelium established the existence of diffusible proteins adds a small but significant increase in the osmotic activity. Plasma proteins originate an osmotic pressure of about 20 mm Hg and caused by the charged particles produced in the Gibbs-Donnan equilibrium is about mm Hg. The sum of both is the oncotic pressure that is the pull exerted by the water plasma proteins. In general, the amount of interstitial fluid is defined by the balance of body fluids through the mechanism of homeostasis.

Fluids intravascular and extravascular compartments are easily exchanged to maintain the right balance.